The Spider in the Corner of the Room by Nikki Owen

Plastic surgeon Dr Maria Martinez has Asperger’s. Convicted of killing a priest, she is alone, in prison and has no memory of the murder.

DNA evidence places Maria at the scene of the crime, yet she claims she’s innocent. Then she starts to remember…

As Maria gets closer to the truth she is drawn into a web of international intrigue and must fight not only to clear her name but to remain alive." 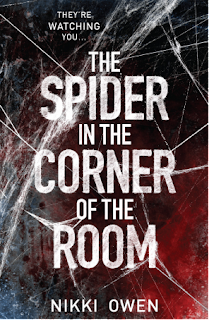 Nikki Owen weaves a complicated web in The Spider in the Corner of the Room which is a gripping psychological, conspiracy-theory thriller and the first in a trilogy.

Nikki Owen is an exceptional writer.  She has managed to concoct a story where the reader does not have the slightest inkling of what is going on but at the same time it is not frustrating, but totally absorbing.

The story is set mainly with Maria in intense therapy sessions but the story shifts around a lot and it is not always entirely obvious whether the shifts are to her memories, an alternative present or the future.  The Spider in the Corner of the Room is not the sort of book you can just skim through; it requires your full attention and concentration.  Even with that, there is so much going on that it was not until I sat down to write this review that I fully worked out how the shifts worked and what the present time consisted of.  It is hard to say anything more without giving away the storyline!

With each shift, I found myself thinking that I finally knew what and who to believe and then I would turn the page, the timeframe would shift again, and once more I would myself back to square one and was left wondering whether I was going mad.

I have not read a book which has a character with Asperger's before and have no first hand experience of it so cannot say how true to form it is, but from reading other reviews of this book, it would appear that Maria is a well-researched and thought out character rather than being the stereotypical version of someone with Asperger's.

The book is powerful and it does make you think how scary and powerless you would feel if you found yourself accused of a murder you cannot remember committing and in a prison where you do not know who you can trust or what you can believe.

Around the middle of the book, I did find my interest waning slightly as the book  as a whole is a little drawn-out and slightly repetitive but that adds to the powerful message.  The build up is slow and the pace does not really accelerate until towards the end of the book when the answers you have been searching for begin to suddenly cascade into the reader's awareness.  As I was nearing the end of the book, I was worried that Nikki Owen was going to end the first in this trilogy without answering a single question that I had flying around my head, but suddenly, right at the last minute, everything begins to come together and the ending does wrap up this part of the series as well as leading the way perfectly for the next instalment.

The Spider in the Corner of the Room is out today, 4 June!
Thank you to Midas PR for the review copy of this book in exchange for an honest review.
Posted by Pukkapad at 09:30