The Start of #MKMania - Revisiting 'The Fabulous Works of Marian Keyes'

I have always loved Marian Keyes as an author and I am not alone; Marian is the bestselling Irish author of thirteen wonderful novels and her books have been translated into thirty-six different languages.

What I have come to learnt is that as well as being a bestselling author, Marian Keyes is twitter-obsessed (if an thirty-seconds goes by without a tweet I know that something is wrong or that she has been separated from her phone, like the time she went to see Strictly be filmed and had to surrender her phone to get close to PASHA!), a lover of knobs (yes, knobs but of the furniture kind) and can often be found completing BeachHouse Banjo(TM) projects or obsessing over the latest fad (Pink and Black Magnets (i.e. Magnums)) or the demise of the Pink Snack.

It is not difficult to see why Marian is so popular.  Her ability to make you laugh out loud by using 140 characters or less is unfaltering.  I very rarely stray from my twitter newsfeed but since discovering Marian on twitter, I direct myself to her page numerous times a day to see what is happening in the world of Marian and Himself.

On Marian's website, there is a section called 'Eleven Things About Marian' and it is here that I learnt how Marian became a bestseller.  I was gobsmacked to discover that Marian never intended to write a novel.  In fact, Marian Keyes has a law degree.  As a lawyer myself, it is hard to imagine that I have inside of me what it takes to be a funny and talented writer in the way that Marian is.  I don't, I know this.  Marian is a very special lady.  Her story goes along the  lines of this: Marian started writing short stories a few months before she gave up the alcohol and after leaving rehab decided to send them off to a publisher.  She says that in a bid to get the publisher to take her seriously, she enclosed a letter saying that she had also written part of a novel.  Of course, she had done no such thing and indeed had no intention of doing so either.  However, the publisher wrote back asking to see the novel.  I am sure at this stage mild panic and hysteria kicked in.  However, she managed to pull herself together pretty quickly as she wrote four chapters of Watermelon, which became Marian's first novel, in a week, yes, you heard me, A WEEK (!!!) and on the strength of that was offered a three-book contract.  It does not surprise me, as every book contract was utterly deserved, but it amazes me and that story alone is testament to what an incredible writer she is.

Having spent so much time in Marian's twitter-company, I realised that it has been so long since I read Marian's early books that I have resolved that this year, I will re-read each of her books in order.  2015 for me is the year of #MKMania (not MK as in Michael Kors, MK as in Marian Keyes!).  I urge you to join me in reminding yourself of the magnificence of 'The Fabulous Works of Marian Keyes'.

So, to start: Watermelon:


"At twenty-nine, fun-loving, good-natured Claire has everything she ever wanted: a husband she adores, a great apartment, a good job. Then, on the day she gives birth to her first baby, James visits her in the recovery room to inform her that he's leaving her. Claire is left with a beautiful newborn daughter, a broken heart, and a body that she can hardly bear to look at in the mirror. So, in the absence of any better offers, Claire decides to go home to her family in Dublin. To her gorgeous man-eating sister Helen, her soap-watching mother, her bewildered father. And there, sheltered by the love of an (albeit quirky) family, she gets better. A lot better. In fact, so much better that when James slithers back into her life, he's in for a bit of a surprise." 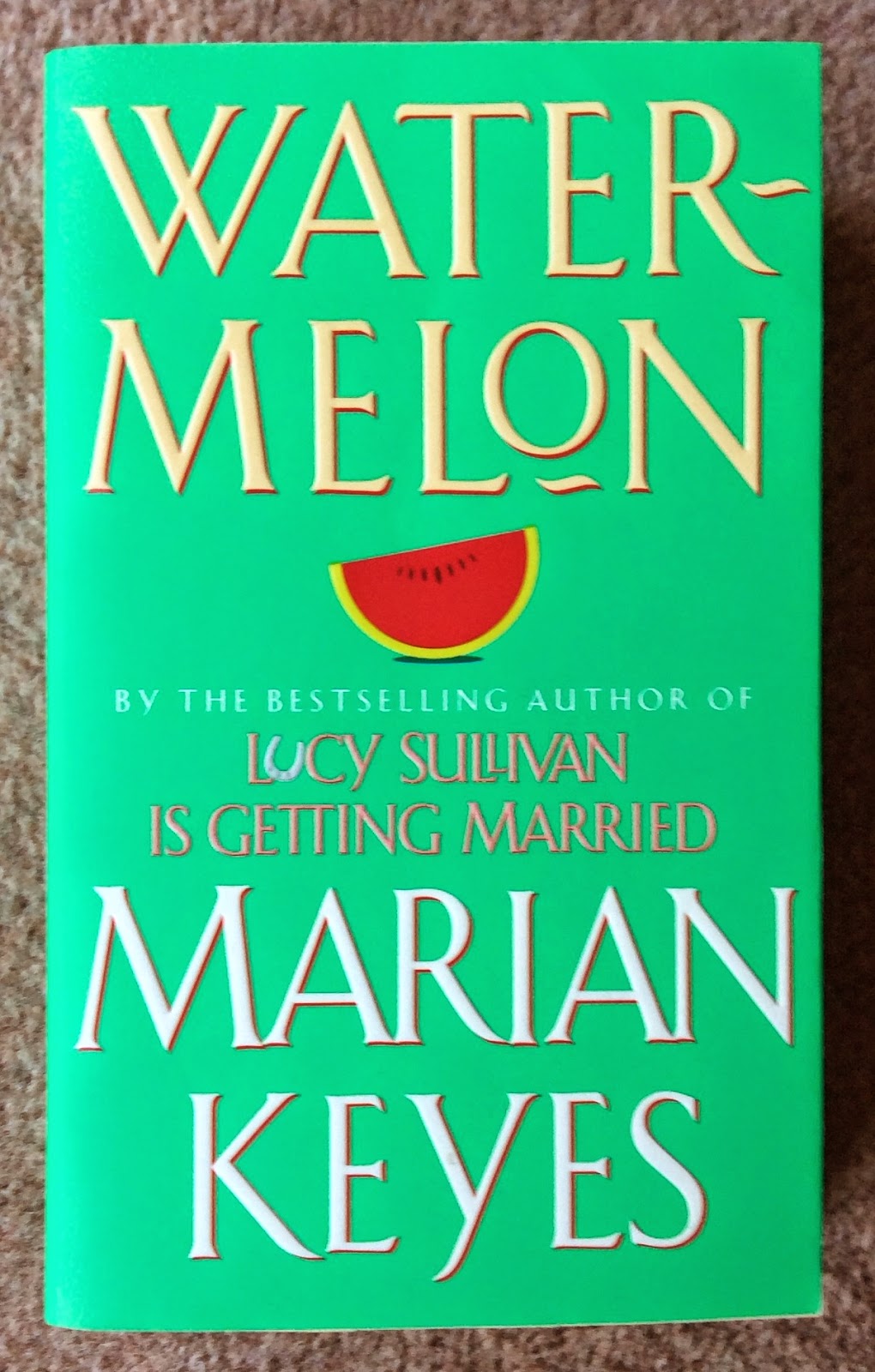 Posted by Pukkapad at 17:55 No comments:

"Catherine is celebrating her thirtieth birthday when her life takes a turn for the worse; her rival Anna, a woman with loose morals, triggers a quarrel between Catherine and her partner Alexander. Following the party, Alexander sexually assaults Catherine, propelling her on a journey in search of a new beginning.

Fleeing to Cornwall, Catherine experiences a rare feeling of déjà vu when she meets a fisherman named Christopher Armstrong. Prompted by this sentiment, she allows a relationship to begin, with the intention of it being platonic. Armstrong, however, has other ideas. As Catherine finds herself more attracted to the Cornish fisherman, she discovers that she still harbours feelings for her first love – a young fisherman called Christopher... Upon discovering that this modern-day Christopher is much less than the gentleman she initially thought he was, Catherine finds herself completely isolated – and in mortal danger...

A traditional romance novel with a dramatic twist, Déjà Vu addresses the serious issue of rape within a relationship."

It did not grip me in the way that I had imagined and I found it to be a little meandering without any major impacts from the storyline; I did not encounter any twists or turns that particularly shocked me.  There were no sub-plots to speak of and I think I could count the number of major points in the storyline on one hand.  The main characters were a bit two-dimensional and the sex scenes, whilst 'explicit' were not, in my opinion, particularly shocking.  I have not read 50 Shades of Grey but I cannot imagine it is any 'worse' than that.

That said, the writing was good and I read the entire book but I did not feel emotionally invested.

Posted by Pukkapad at 18:37 No comments:

"Surviving motherhood? It's all about having the right support network.

Lawyer and new mum Cassie has a husband who converses mainly through jokes, a best friend on the other side of the world, and a taskforce of Babycraft mothers who make her feel she has about as much maternal aptitude as a jellyfish. Husband Jonathan dismisses Cassie's maternal anxieties, but is he really paying attention to his struggling wife? He's started sleep talking and it seems there's more on his mind than he's letting on.

Then sexy, swaggering ex-boyfriend Malkie saunters into Cassie's life again. Unlike Jonathan, he 'gets' her. He'd like to get her into bed again too... And on top of all her emotional turmoil, she also finds herself advising a funeral director on ghost protocol and becomes involved in an act of hotel spa fraud, never mind hiding cans of wasp spray all over the house to deal with the stalker who seems to be lurking everywhere she looks.

Marriage and motherhood isn't the fairytale Cassie thought it would be. Will her strange new world fall apart around her or will tiny acts of love be enough to get her through?

Funny, perceptive and real, Tiny Acts of Love portrays the rawness of motherhood, the flipside of love and the powerful lure of paths not taken."

I thought that Tiny Acts of Love sent a really powerful message but in a gentle and subtle way.  The post-natal depression element of the storyline could easily have overwhelmed and taken over but it does not overpower in the slightest.  In fact, the descriptions and ultimate message, which does not show itself truly until the very end of the book, could apply to anybody and the way that they feel about life in general; it is certainly not limited to post-natal depression.  You definitely do not need to be a mother to read and enjoy this book.

There were lots of different threads and sub-plots to this book, which meandered alongside the main storyline and I enjoyed every single one of them.  Elements of the story may come across as slightly far-fetched but it is a fun book and the characters draw you in so you do not necessarily realise you are reading about the craziness that you are.  Each of those sub-plots are dealt with in a perfect manner and are each ultimately tied up for the reader.

A great read, there were good twists along the way and an entirely satisfying ending that contained a very powerful message which I think will resonate with a lot of people, parents or not.  There are paragraphs in the final epilogue of the book that made something click inside my head and they will stay with me for a long time.  An exceptionally well-crafted debut novel from Lucy Lawrie.

And once you've read Tiny Acts of Love, you can head over to Lucy's website where Lucy has turned parts of the story around and written them from another characters point of view, which I really love as you get to see the flip side to the story which is not always as you, the reader, conjure up in your mind.

Thank you to Black and White Publishing for the copy of this book in exchange for my honest review.
Posted by Pukkapad at 17:43 1 comment: