"Love happens when you least expect it…

When Eliza Barnes said ‘I do’ to her husband all those years ago, she thought that they’d be together forever. Instead, he’s flown to Abu Dhabi to start a new life, and she’s returning to the little seaside town of Lavender Bay.
It’s finally time to chase the dreams she’s put on hold for so long, whipping up luxury bath products and organic soaps using local ingredients. Of course, she didn’t expect to meet local farmer, Jack Gilbert, or for him to be quite so gorgeous!
So when her husband turns up, she knows she must decide between the man she knows everything about and the man who makes her heart race in ways she’d never imagined – before it’s too late…" 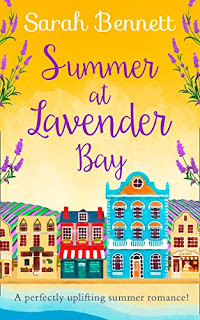 Summer at Lavender Bay is the second in the delicious Lavender Bay series.  It can be read alone but I'd strongly recommend reading as a series.  This book follows Eliza who we've learnt a little bit about from the first book; enough to know that she has lost her sparkle.

In Spring at Lavender Bay, there is a fleeting mention of an incident with a red sports car and I remember wondering at the time what the significance to that was but never saw it unravel, however, all becomes clear in this book!  I love the way Sarah Bennett has weaved the full story through all three of the books in the series.

We also get to meet the family from the lavender farm, the reason the Bay has its name.  It's exceptionally difficult to choose a favourite of the three books but I do think this might win it for me; I loved Jack, his relationship with his nephew, the support he gives Eliza and even his fiery nature.  He might even just manage to give Eliza her sparkle back (for which I love him even more).

You also get to continue to learn about Beth and Sam whose story is covered by Spring at Lavender Bay which is a lovely bonus to the story in this book!

Summer at Lavender Bay is out now and available to buy here on Kindle or in paperback (prices correct at time of writing):
Posted by Pukkapad at 12:30 No comments:

"Beth Reynolds loved growing up close to Eleanor’s Emporium – a bric-a-brac shop full of wonders on Lavender Bay. Devastated to learn that Eleanor has died, she returns home from London immediately and is shocked to discover that the elderly lady has left the shop to her!
Vowing to restore it to its former glory, she only intends to stay until the end of the season. Although the longer she spends in the colourful seaside town, the more she falls back in love with everything she left behind…and quite possibly, with her best friend Eliza’s older brother, local chef Sam Barnes!
Why didn’t she notice he was quite this gorgeous before? And will their spring fling be enough to convince her to stay?" 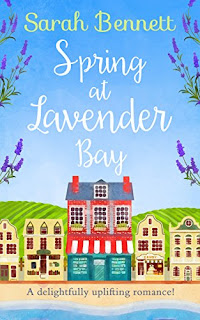 There is no doubt about it, Sarah Bennett has become a new firm favourite of mine.  Having adored her Butterfly Cove series, I took to Amazon to see what other series there are and I plumped for the Lavender Bay series.
This first instalment at Lavender Bay focuses on Beth who isn't particularly happy with her life in London.  When she inherits Eleanor's Emporium which is an extremely special place for her, she only intends to stay until the end of the season but Lavender Bay works its magic on her and, a bit like the reader, she doesn't stand a chance.
Once again, Sarah's characters, location and storyline are absolutely fabulous.  As part of Beth's story, you meet her two best friends, Eliza and Libby which leads nicely onto the next two books in the series; one for each character.  As with The Butterfly Cove Series, I leapt from one book straight into the next because I couldn't bear to wait for more than a few minutes (and I highly recommend you do the same!)

Spring at Lavender Bay is out now and can be purchased here on Kindle or in Paperback (prices correct at time of writing):
Posted by Pukkapad at 12:00 No comments:

"Aria Philips has lived on Jewel Island all of her life. Even when her sisters Clover and Skye left its stunning shores for bigger and better things, Aria stayed to help her father run their family hotel.
A year after her father’s death Aria’s done everything she can to keep things afloat but the hotel has long been struggling to make a profit. With so few guests Aria risks losing the only home she’s ever had.
Noah Campbell earned his fortune from making hotels a success, and he also just happens to be staying on Jewel Island this summer. Could he be the answer to Aria’s problems? If only he hadn’t kissed her under the willow tree the year before and never called her again. It had been the most incredible kiss of her life, but clearly business and pleasure should never be mixed.
As gorgeous and charming as Noah may be, Aria vows to keep things professional while she seeks his help. But for the past year Noah has been keeping a secret and his return to Jewel Island is about to change Aria’s life forever…" 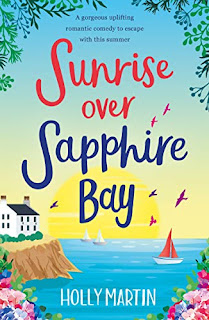 Jewel Island sounded like a place I would quite like to visit and would be great for anyone looking for an escape to the coast during lockdown.

I enjoyed the relationships between the characters in this book and I loved the way that Noah wanted not only Aria to be happy but her sisters too.  Their relationship was inevitable with the clear chemistry between them but I felt for Noah and understood his predicament.  I missed Aria's father who features in the very early parts of the book as his relationship with Aria was lovely to see.  Look out for Mrs O'Hare too; she is fabulous.

I have to admit that I found there to be something a little bit annoying or repetitive about Aria and her "not good enough" attitude where she was sure that everyone was going to leave her because of her past as well.

There is a second book in the series due to be released later this year called Autumn Skies over Ruby Falls and I would certainly consider reading this to revisit Jewel Island.  I've really started to love the series of books that certain authors do which allow you to revisit characters at a later time (albeit that it isn't their main story) so you can get a glimpse of where they ended up.

Sunrise over Sapphire Bay is out now and can be purchased here on Kindle or in Paperback (prices correct at time of writing):

Posted by Pukkapad at 12:00 No comments:

The Bed and Breakfast on the Beach by Kat French

"A Greek island solves all life’s problems…doesn’t it?
Winnie, Stella and Frankie have been best friends forever.


When their lives unexpectedly unravel, they spontaneously decide to buy a gorgeous B&B on a remote Greek island. Drenched in hot sun, Villa Valentina is the perfect escape from reality. But when Winnie meets Jesse, their brooding neighbour, she finds that Greece is full of its own complications – not least how attractive he is…


Meanwhile, Frankie and Stella are discovering that Villa Valentina has its own secrets – starting with the large supply of gin in the cellar and the arrival of a famous rock band. A band with one very good-looking member who just might distract Frankie from thoughts of her husband…" 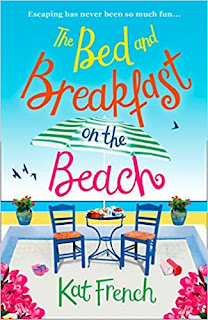 This book isn't just one big fairytale, it's three combined into one!  In The Bed and Breakfast on the Beach, Winnie, Stella and Frankie each go on their own journey (after they decide to buy a B&B on a remote Greek island whilst on a long weekend away from their difficult lives in England) and what ensures is absolutely delightful.
I loved that the story wasn't as expected, for example, there isn't that much B&B'ing that goes on but rather a local gin-making tradition and interactions with the islanders.
Reading the acknowledgements, I loved to read that the character of Jesse was inspired by Hooten from Hooten and the Lady.  Having just recently watched the series; I can totally see this!
An absolutely perfect summer holiday read (or summer lockdown read!).  A story of sunshine, love, new starts and bravery!

I received a free copy of this e-book from NetGalley in exchange for an honest review.

The Bed and Breakfast on the Beach is out now and can be purchased here on Kindle or in Paperback (prices correct at time of writing):
Posted by Pukkapad at 12:00 No comments:

A Parcel for Anna Browne by Miranda Dickinson

"The gift of a lifetime?

Anna Browne is an ordinary woman living an ordinary life. Her day job as a receptionist in bustling London isn't exactly her dream, yet she has everything she wants. But someone thinks Anna Browne deserves more . . .


When a parcel addressed to Anna Browne arrives, she has no idea who has sent it. Inside she finds a beautiful gift - one that is designed to be seen. And so begins a series of incredible deliveries, each one bringing Anna further out of the shadows and encouraging her to become the woman she was destined to be. As Anna grows in confidence, others begin to notice her - and her life starts to change.
But who is sending the mysterious gifts, and why?" 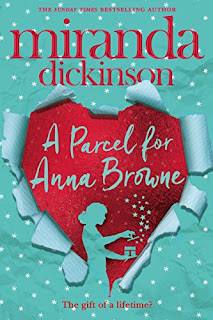 When I first started reading this book, I wondered how Miranda Dickinson was going to get a whole book out of someone receiving a parcel but WOW.  It didn't take long for me to be drawn in and it is a storyline that I haven't come across before.
I loved the descriptions of the parcels.  I spent an obscene amount of the book speculating and debating with myself who the mystery sender of the parcels was going to be and whilst, when revealed, I had at one point in time thought fleetingly of this person, I had never been able to settle on who I was placing my bets on.
Miranda does well with the characters; some you like and some you don't.  This is a story of discovery, romance, mystery, friendship and is simply a little bit special.
I received a free copy of this e-book from NetGalley in exchange for an honest review.

A Parcel for Anna Browne is out now and available to purchase here on Kindle:
Posted by Pukkapad at 13:10 No comments: