The chapters in this book alternate between “Rosie” (A recently orphaned girl who is understandably a bit lost in the world) and “The Olive Estate” (where we meet Enzo and his traditional Italian family).  I found this a little frustrating at first, as although it allows the author to build the story of both characters gradually, I often found myself having to switch my attention from one character to another just as I’d begun to really get into reading about one of their lives.  However, after a while, it begins to flow better and it does keep the pages turning. By half way through the book, I quite enjoyed the switching and as the two characters lives collide, it brings a deeper insight to each person's views.
At the end of each of Rosie’s chapters, there is a short addition from Addolorata’s (a friend of Rosie) perspective (either in the form of a journal entry or ‘what she said’) – I liked this, and thought it added something different.
Italy features heavily in both Rosie and Enzo’s chapters.  Firstly the Olive Estate is in Southern Italy and secondly, Addolorata  is part of an Italian family who run an Italian restaurant in London.  As Rosie and Addolorata’s friendship grows, Rosie soon becomes part of Addolorata's family and it is heart-warming to read. The book explores both Italian family life and the vibrant flavours of Italian food extremely well.
The book is a good illustration that so many of us have the lives we actually lead and those we dream of leading.  It’s based heavily around family, friendship and real life, and this overpowers the romance element.  As expected, it is a fairly predictable story, so don’t expect twists and turns throughout that will keep you guessing.  The book has a fairly leisurely pace, although some parts of the story are dealt with in just a few pages which at times seems a little strange.  However, if you like leisurely reads, you’ll get along with this book just fine.  Ideal for light reading whilst on holiday!
Posted by Pukkapad at 11:46 No comments:

I recently won a £50 voucher from Lovereading’s Facebook page of which they have a couple depending on what type of books you are into:
This £50 book voucher was to be used on their website: http://www.lovereading.co.uk/. It took me several weeks to browse through their website, which I highly recommend – there is a fabulous mix of authors and categories to chose from.

Finally I chose a lovely set of 9 books: 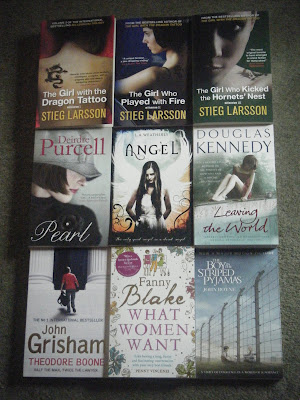 So if you love books, I highly recommend a visit to Lovereading's website!﻿
Posted by Pukkapad at 11:30 No comments:

The Girl with the Dragon Tattoo

I have been meaning to read this series for years, and have a number of friends who keep recommending it and constantly reminding me! I suffered several unsuccessful trips to my local library; apparently being an International Bestseller means the book is always out of stock with a number of reservations in line waiting to read it.  However, as you will see in my next blog, I was lucky enough to win a £50 book voucher which I used to purchase a number of books including The Millennium Trilogy by Stieg Larsson.
So what did I think.....? In my opinion, it is an exceptionally well written crime novel.   You would never know it was originally written in Swedish and is in fact extremely well -constructed.
The Girl with the Dragon Tattoo follows three central characters who ultimately all come together in an attempt to solve a family secret which has remained just that for a number of decades.  The head of the Vanger Corporation is tormented by the disappearance of a young family member decades earlier, and is convinced that a member of his family murdered her.  A recently disgraced journalist and an anti-social investigator are subsequently hired to unravel the yarns of mystery that exist and arrive at a very surprising outcome.
The prologue was enough for me to be drawn in, and intrigued as to what could possibly have happened to this young girl.  I wouldn’t say the novel is particularly fast-paced but slowly builds the complex story, including the extended family history, and then picks up pace about half way through. It is gripping enough to keep you turning pages.  The main characters are very easy to warm to and the plot is interesting and not too predictable.  Within each chapter, Larsson jumps around quite a lot between characters but actually it is generally very easy to follow.
I found it extremely interesting to discover the background to the author, who witnessed a gang rape of a young girl when he was 15, and how this impacted on his career.  His books focus both on a central character called Lisbeth (also the name of the rape victim) and a theme of sexual violence against women.  The novel is particularly graphic in places, but I think it is a sign of how well-written it is, that these parts of the book work and it all blends together very well.  Other themes running throughout the book are journalism, the lack of morality in the corporate world, and Swedish society.
It is a shame that Larsson is no longer with us and a outstanding crime-writing career was cut short, as his works would surely have developed into even more exceptional novels.  This trilogy will definitely go down in history.
Posted by Pukkapad at 18:04 No comments: