Review of The Donor by Helen FitzGerald

Will Marion has two perfect kidneys. His daughters aren't so lucky. Question is: which one should he save?

Will's 47. His wife bailed out when the twins were in nappies and hasn't been seen since. He coped OK by himself at first, giving Georgie and Kay all the love he could, working in a boring admin job to support them.

Just after the twins turn sixteen, Georgie suffers kidney failure and is placed on dialysis. Her type is rare, and Will immediately offers to donate an organ. Without a transplant, she would probably never see adulthood. So far so good.

But then Kay gets sick. She's also sixteen. Just as precious. Her kidney type just as rare. Time is critical, and he has to make a decision.

Should he buy a kidney - be an organ tourist? Should he save one child? If so, which one? Should he sacrifice himself? Or is there a fourth solution - one so terrible it has never even crossed his mind?


This book focuses on two twins, who are very different in themselves and their relationship with their father, who has brought them up single-handed.
When I opened this book and read the first chapter, my first reaction was “What?! You can’t tell me that on Page 1!” I have to say I was confused and I thought that the whole storyline had been given away in the first few pages.  I am pleased to say I was wrong, there is a twist and it’s a twist that I didn’t guess (although now I know it, it is kind of blindingly obvious!).  I didn’t find the book predictable, and I had no idea how this was going to pan out until I was specifically told!
The story develops well over the chapters, and throughout the book we learn about the characters past as well as their present.  The book also has varying chapters from different characters’ perspective (Will and Georgie, one of the twins) which I have grown to enjoy and I think it brings out the best in a story. The interactions and relationships between the characters are brought out very well, and the sibling rivalry is well-documented.
I wasn’t blown away by it, and it wasn’t as heart-breaking as I had expected it to be but it was a good read and I did enjoy it.  Despite the bleak subject matter, it is actually a relatively light read.  I enjoyed it as a holiday read.
Posted by Pukkapad at 13:30 No comments:

Whilst on holiday, I read two of John Green’s books; An Abundance of Katherines and Paper Towns.  I absolutely loved both.  John Green has a wonderful style of writing, and both books (but in particular an abudance of Katherines) are laugh out loud funny.  Highly recommended!
An Abundance of Katherines
When it comes to relationships, everyone has a type. Colin Singleton’s type is girls named Katherine. He has dated–and been dumped by–19 Katherines. In the wake of The K-19 Debacle, Colin–an anagram-obsessed washed-up child prodigy–heads out on a road trip with his overweight, Judge Judy-loving friend Hassan. With 10,000 dollars in his pocket and a feral hog on his trail, Colin is on a mission to prove a mathematical theorem he hopes will predict the future of any relationship (and conceivably win the girl).
It’s not often I laugh out loud at books but this book is hilarious (and I don’t mean just a few laughs, I mean the whole way through!)  It is packed full of an incredibly unique story, and there are even footnotes and an appendix.  Green seems to have a wonderful ability to tap into the teenage mind and recreate this in his books.
A lot of people seem to say this is their least favourite of Green’s books, and I'm disappointed people don't appreciate the beauty of this book.  Taking the books as a whole, this one was my favourite.
An easy read (despite the mathematical formulas) and well worth it.  Although it is a YA book, it is not as simplistic as some others I have read – and is definitely worth a read even for older readers.
Paper Towns
Who is the real Margo? Quentin Jacobsen has spent a lifetime loving the magnificently adventurous Margo Roth Spiegelman from afar. So when she cracks open a window and climbs into his life – dressed like a ninja and summoning him for an ingenious campaign of revenge – he follows. After their all-nighter ends and a new day breaks, Q arrives at school to discover that Margo, always an enigma, has now become a mystery. She has disappeared. Q soon learns that there are clues in her disappearance …and they are for him. Trailing Margo’s disconnected path across the USA, the closer Q gets, the less sure he is of who he is looking for.
This is a story of teenagers, but also a story of mystery in which Q finds and follows clues to bring him ever closer to the girl next door who he is in love with.  Once again, Green is able to show his incredible understanding of teenagers, and creates some wonderful characters.  This is another wonderfully unique story, packed full of humour and mystery.  It isn’t predictable, and it certainly kept me turning the pages.  Easily a book for any age group, despite being based on teenagers and being another YA book.
The man himself, John Green
I didn’t get round to reading John Green’s first book Looking for Alaska, but from what I gather his writing and books have only got better and better since this debut.  Looking for Alaska won the Michael L. Printz Award in 2006.  An Abundance of Katherines was a 2008 Michael L. Printz Award Honor Book and a finalist for  the Los Angeles Times Book Prize.  Paper Towns was awarded the 2009 Edgar Award for Best Young Adult Novel and the 2010 Corine Literature Prize.
In 2007, Green and his brother Hank ceased textual communication and began to talk primarily through videoblogs posted to youtube.  Although they have long since resumed textual communication, John and Hank continue to upload three videos a week to their youtube channel, vlogbrothers. Their videos have been viewed more than 75 million times, and their channel is one of the most popular in the history of online video. These videos are well worth a look, as both John and his brother Hank clearly share the humourous gene – you can see their youtube page here
Green’s next book (The Fault in Our Stars) is available for pre-order now on amazon. This book will be released on 10 January 2012
Posted by Pukkapad at 12:59 No comments:

Review of Shimmer by Alyson Noël

Thanks to Pan Macmillan for sending out a copy for me to review!
Alyson Noël is a well-known author of teen books, including the bestselling IMMORTALS series.  Shimmer is the second book in a spin-off from the IMMORTALS series, creating a new series of Riley Bloom novels which are aimed at younger readers (10+).
*******************
** What the back of the book says **
Riley Bloom is starting to get to drips with being dead. OK, so she’ll never turn thirteen, but she can manifest anything she desires.  And, after her first success as a Soul Catcher, she’s finally got her ‘glow’ on.  Then she meets Rebecca – a furious ghost who is trapped on Earth, desperate to seek revenge for her own death – and Riley’s determined to help her, even if it means defying her cute-but-annoying guide, Bodhi, and breaking all the rules…. 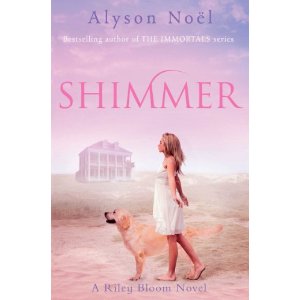 ** What I thought **
This book is a little hard to review as it is aimed at readers of 10+, and being a few too many years older than that myself, it is difficult to know exactly what a 10 year old would think of this.  However, I think it is an engaging read and certainly kept me interested so is something I would absolutely recommend.
For me, it was like reading a short story, and an enjoyable one.  Riley Bloom is 12 years old, and Alyson Noël has perfectly captured that in her writing style.  Yes, she is a little annoying but I think that is how Noël has captured her immaturity.  (Dark Readers got it spot on in the review when they said ‘she well and truly gets the cocky, annoying slightly sarcastic, wannabe teen right’).  As a character, she grew on me and I think she grows as a person as well throughout the book; she seems to mature as the book progresses to deal with slavery, murder and a lot of built up rage.  Noël deals with these issues well, and the book has some deep messages centering on love and forgiveness.
I hadn’t read the first in this series, Radiance, but I would certainly pick up the next book in this series as an enjoyable light read.  There is a lead up to the next book in Shimmer, and the premise of the next book (based on being able to deliver messages to your loved ones through their dreams) intrigues me.  I’ll also definitely be looking out for Alyson Noël’s other works aimed at teens, and absolutely definitely her adult novel Fly me to the Moon.
Noël is certainly a talented author to watch out for.  The dramatic rights for both the Immortals and the Riley Bloom series’ have been bought by Summit Entertainment, best known for creating the Twilight films. This good me the next big sensation to hit our cinema screens….!
** Shimmer is published on 5th August **
Posted by Pukkapad at 14:25 2 comments: