The back of the book says:
“In the small city of Strattenburg, there are many lawyers, and though he's only thirteen years old, Theo Boone thinks he's one of them. Theo knows every judge, policeman, court clerk - and a lot about the law. He dreams of being a great trial lawyer, of a life in the courtroom.

But Theo finds himself in court much sooner than he expected. Because he knows so much - maybe too much - he is suddenly dragged into the middle of a sensational murder trial. A cold-blooded killer is about to go free, and only Theo knows the truth.

The stakes are high, but Theo won't stop until justice is served.”
When choosing this book, the synopsis of this book intrigued me.  I’m a law student, and although I haven’t read any of John Grisham’s other novels, I certainly recognised the name and thought this would be a good choice!  However, I’m sorry to say, this was another disappointing read for me! Initially I didn’t realise that the book was aimed at younger readers, however the large writing and the plot itself very much gives this away.  That in itself wasn’t a problem; I quite like easy-to-read books but for me, it wasn’t gripping and it didn’t keep me turning the pages as I’d imagined it would.
It is a very accessible read, and I got through it in just a few hours, however to me it felt like half a book.  There is no cliff-hanger ending implying that there will be a sequel to follow up the story, yet so much is left unanswered (and not in a “leave it to the readers imagination” kind of way).  For example, throughout the book, which focuses on a murder trial, there is reference to a man called Omar Chepee.  This man works for the defendant (accused of murder) and gives menacing looks, follows people etc. and therefore you are constantly waiting for him to do something, yet the book ends and there is absolutely no mention of him.  I must admit, I usually hate it when books (and especially films) leave a lot of the ending to the readers imagination yet this was even worse as it just didn’t seem to come to a natural conclusion.
If you take the book for what it is (i.e. teen fiction), then it is an OK read and I didn’t hate it but, as an adult reader, I found the whole plot line disappointing.  The Sunday Express had this to say about the book: ‘For any young readers tired of wizards, vampires and Greek gods, there’s now a new kid on the young fiction block, and this one really does have serious powers: Theodore Boone, half-boy, half-lawyer... fans will be pleased to know there will be more of Theo’s adventures to come.’  Unfortunately, I have to whole-heartedly disagree; this book is absolutely no match for the likes of Harry Potter or Twilight!  It’s a shame really as John Grisham has the reputation of Number One International Bestseller and actually the plot has a lot of potential which just isn’t realised.
Having said that, I haven’t actually read any John Grisham books before, and as a law student, I will be picking up one of his adult books in the near future to see if they fare any better.
Posted by Pukkapad at 13:15 No comments:

The Boy in the Striped Pyjamas by John Boyne

** No Spoiler Included **
It is likely that most people now know what this book is about, due to the film released in 2008.  Even if you haven’t seen the film, you’re likely to have come across the trailers.  Initially, they wanted you to start reading the book without knowing the subject matter (the original synopsis of John Boyne’s book was:


"The story of "The Boy in the Striped Pyjamas" is very difficult to describe. Usually we give some clues about the book on the cover, but in this case we think that would spoil the reading of the book. We think it is important that you start to read without knowing what it is about. If you do start to read this book, you will go on a journey with a nine-year-old boy called Bruno. (Though this isn't a book for nine-year-olds.) And sooner or later you will arrive with Bruno at a fence. We hope you never have to cross such a fence.")
However, this has now been taken away due to the prevalence of the film.  Therefore, the newest edition of the book features a slightly more detailed synopsis.  However, I am not going to go into detail about the plot of this book.
John Boyne is an Irish author, and although this is his fifth novel, it is his first book written for children.  My initial reaction to this was that given the subject matter, I didn’t think it was particularly appropriate for children.  However, given that the back of the original book states “this isn’t a book for nine-year olds”, I take some comfort from it being written for slightly older children.  Indeed, when I think back to my school days, we were taught about the Holocaust from a relatively young age in secondary school.  John Boyne himself addresses this concern by saying that ‘I do feel that young readers can approach serious subjects like this if the stories are told in the right way and I tried to tell it in the right way’ .  I do agree with this, the story is told from Bruno’s point of view, who at nine years old, is relatively naïve and innocent.  Therefore, although the story is tragic, it is not told in a particularly graphic way that would scar you for life.
It is certainly accessible to younger readers, but because the story is told by a child who doesn’t understand the full extent (if at all) of what is happening around him, I think a prior knowledge of the Holocaust would be needed to really appreciate this book.  Therefore, I’m not entirely convinced that the premise of this book being for younger readers isn’t flawed.  For example, Bruno mistakes Auschwitz for “Out-With” and refers to Hitler as “The Fury”, instead of the Führer.  None of these mistakes are explicitly corrected in the book, and the reader is presumed to be able to work it out themselves.
The book is 216 pages long, and printed in large text.  For me, it was easily readable in one sitting.  It certainly is young-person-friendly.  The narrative is certainly in keeping with being written from a nine year olds perspective, but at points I did find it slightly forced.  In particular, the repetition; I understand this is meant to add to the believability of the story being told by a chid but for me it felt a bit like the author had sat down and thought “now, how do I think like a nine year old”.  I wanted it to flow a little more.
I haven’t seen the film, but did see the trailers which certainly made me realise the film (and book) would be a heart-breaking story.  However, I am disappointed to say that the book didn’t quite live up to expectations for me.  Perhaps because I expected to be a bit more in depth and harrowing, and actually in comparison to these expectations, the book was quite light reading until the last few pages.  (Saying that, I am certainly not making light of the subject).  In my opinion, nothing much really happens throughout the majority of the story (although it wasn’t boring), until the last two chapters – which delivers a pretty strongly impacting twist which did make me gasp!
However, the book isn’t realistic.  It is totally unfeasible that the son of the Commandant at Auschwitz, having lived at Auschwitz for a year, would never have heard the word Jew.  Bruno doesn’t grasp what is happening in the concentration camp at all, despite his bedroom window overlooking the camp.  Certainly, in reality, a boy of his age growing up in Germany in 1943 would know something about these things; he would certainly be taught to worship Hitler and to have strong negative feelings about Jews.
It certainly isn’t realistic, it has some quite major flaws and it isn’t historically accurate, and therefore if this sort of thing offends you then it’s probably best you give it a miss.  But if you can take it for what it is (and you've avoided the spoilers), it is worth a read if you have a spare couple of hours (even if for those last two chapters alone).  I presume the film is set heavily on the book, and so if you’ve seen the film, I imagine the book doesn’t really add anything!!
Posted by Pukkapad at 15:33 No comments:

I managed to get through 2010 missing Rosamund Lupton’s highly acclaimed debut novel ‘Sister’.  However, when Postie bought me her second novel ‘Afterwards’, courtesy of Best Magazine to review (I signed up to Best Book Club through their facebook page), I took to Google to learn more about her.  I soon discovered how successful her first novel had been, selling nearly 200,000 copies in just ten weeks and spending 14 weeks on the Sunday Times bestseller list. Impressed, I settled down on the sun lounger in my back garden to see what all the fuss was about....!
Having not read ‘Sister’, I can only imagine how the success of this second novel will compare. However, I have to say it is a fantastic read! It is an absolutey fantastic page-turner; it only took a few lines for me to be totally engrossed.  Rosamund Lupton draws you in very quickly, and I felt an instant connection with the characters.
I found this book to be an absolutely incredible portrayal of the lengths family will go to for one another; and communicated from a very interesting and different perspective – It is told by the mother of the family from the point of view of an out of body experience whilst her physical body is in the hospital in a coma.  An extremely moving story, but with enough twists and turns along the way to keep you guessing.
If you’ve read and liked ‘If I stay’ by Gayle Forman (reviewed below), you’ll absolutely love this!  I will absolutely be investing in a copy of ‘Sister’ and will definitely be keeping my eye out for Rosamund Lupton's future works! 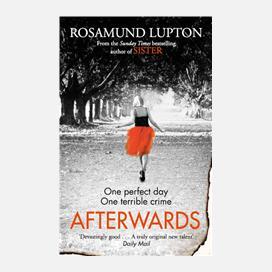 In addition to my 2011 Reading challenge....I am signing up to Book Chick City's Mystery & Suspense Reading Challenge 2011 to read at least 12 mystery and suspense novels!!


I have a few already waiting on my bookshelf to be read....so even though it's already June, I think I should be able to get through 12 by 31st December!
I'll keep you updated....!

Posted by Pukkapad at 22:54 No comments: