Review of About Last Night by Adele Parks

I received this book as a competition win from the lovely Amanda at onemorepage - Thank you Amanda!


"Steph, eternally solid, considerate and dependable, is begging her best friend to lie to the police as she's desperately trying to conceal two shocking secrets to protect her family. Pip, self-consigned to the role of scatty, frivolous hot-head is overwhelmed; she's normally the one asking for help in a crisis although never anything as catastrophic as this. Both women have always believed that friendship is built on mutual selflessness, compromise and trust.


Are those beliefs now to be tested beyond endurance?"* 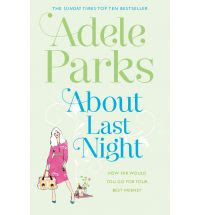 
Uniquely, this book is set over a five-day time period.  In these five days, lives changes, friendships and relationships are tested and crimes are considered and committed.  These five days centre on two main characters; Steph and Pip.


It isn’t predictable, and throughout the book I often wondered which direction Parks would take it.  I always appreciate that uncertainty, as there is nothing worse than it being blindingly obvious what is going to happen.


There isn’t much dialogue, but instead the story is told through third person narrative.  I know a lot of readers have struggled with these, finding that it doesn’t move quick enough and there is too much reminiscing.  However, I enjoyed the leisurely pace which managed to hold my attention due to the twists and turns that Parks provides at just the right moments.


There is something unique about this story, and it was one which I enjoyed immensely! I'll certainly be checking out more of Adele Parks' books in the future!