"The most wonderful time of the year…

Libby Stone has lived in Lavender Bay all her life. She loves the little seaside town and has big dreams to turn her father’s greasy old chippy into a dainty teashop – not that she’s told him yet!
Finding love isn’t easy amongst the cluster of coastal houses, but it’s not every day that someone quite as handsome and mysterious as Owen Coburn walks into the local pub.
And as the snowflakes begin to swirl on the promenade, Libby realises she’s falling for him. But Owen has been keeping a secret that could destroy everything…" 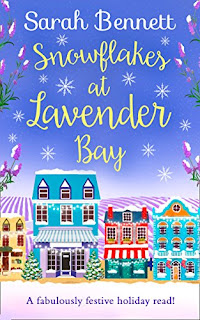 Snowflakes at Lavender Bay is the third in the delicious Lavender Bay series.  As always, it can be read alone but I'd strongly recommend the series and, of course, reading them in order.

The wonderful thing about the series is that each book focuses on a particular individual but you also get to revisit old characters and so you don't completely lose touch with the people you've come to love from previous books.

This book follows Libby who I feel like we know quite well from the previous books; she felt like the most unique character to me from the beginning.  Owen has also featured in each of the previous books in a much smaller role; I didn't warm to him previously but, by the end of this book, he had won me round!  In fact, the start of Snowflakes at Lavender Bay goes slightly back in time as you get to learn a bit more about Owen's backstory and you revisit parts of the earlier books which you now see from a different perspective.

I loved Libby's dad the most and the journey he goes on in this book.  He just loves Libby so much and it's adorable to see.  Again, there is a fleeting mention of something with Libby's dad in one of the earlier books that only became clear and relevant in this storyline (I won't spoil it for you!).  Hands down to Sarah for weaving these 3 books together in such an incredible way.

Beth, Sam, Eliza and Jack feature lots so you get to see more of them too which I love!  I loved the part of this story which really integrated Owen into the friendship group which was Sam's new business venture.

The whole book (and series in fact) was very emotional and I was also very sad to leave Lavender Bay behind but can't wait for Sarah to introduce me to her next location and characters!

Snowflakes at Lavender Bay is out now and available to buy here on Kindle or in paperback (prices correct at time of writing):