Blog Tour: Do Her No Harm by Naomi Joy

One unsolved murder. A best friend determined to right the wrongs of the past.

On the 21st August Tabitha Rice disappeared without a trace. All the signs point to murder, but no signs point to a murderer. The easiest answer is her husband, Rick. But he protests his innocence and there is little proof he is the murderer.

Annabella knows there is more to the story than what the police are telling. Tabitha was her best friend and she vows to uncover the truth.

As Annabella delves further into the past, she uncovers sides to Tabitha that she never saw coming, and she finds herself asking the question... Was this murder? Or is there more to Tabitha Rice's story than meets the eye? 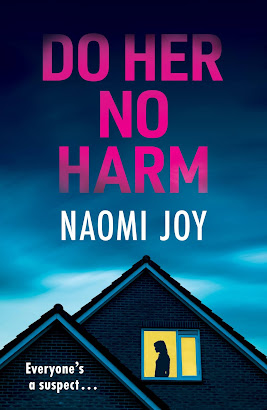 I'm delighted to finish off the blog tour of Do Her No Harm... 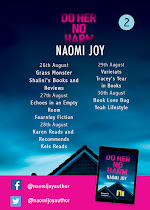 This book starts off with a scene from five years ago and I instantly wanted to know what happened to Tabby.  The book is split into different parts and alternates between different points in time (now, 5 years ago and 15 years ago) and the reader hearing different sides of the unfolding story and past of the characters (Annabelle, Tabitha and Rick).  This works well and I didn't find it confusing (unless I tried to read the book in short bursts as it's difficult to keep track); the story flows well and kept me wanting to know more.
Most of the 'action' takes place in the final part of the book and some readers may find the early parts a little slower than they were hoping for; this is not a fast paced thriller but it is a good read.  The early parts of the book really set the history of the characters and the disappearance of Tabby but the drama doesn't come for some time.
I had no idea throughout the book what had happened to Tabby; I had a couple of theories but they didn't come close to the truth which I found out only as I saw the story unfold on the pages.  I found the conclusion to be tied up and didn't leave me with any outstanding loose ends.
There are also some serious underlying themes in this book surrounding mental health affecting more than one of the characters we encounter.  A book of mystery, deceit, revenge and suspicion.
Do Her No Harm is out now on Kindle (free with Kindle Unlimited) and in paperback (prices correct at time of writing):