Too Charming by Kathryn Freeman

"Does a girl ever really learn from her mistakes?

Detective Sergeant Megan Taylor thinks so. She once lost her heart to a man who was too charming and she isn’t about to make the same mistake again – especially not with sexy defence lawyer, Scott Armstrong. Aside from being far too sure of himself for his own good, Scott’s major flaw is he defends the very people she works so hard to imprison.

But when Scott wants something he goes for it. And he wants Megan. One day she’ll see him not as a lawyer, but as a man ... and that’s when she’ll fall for him.

Yet just as Scott seems to be making inroads, a case presents itself that’s far too close to home, throwing his life into chaos.

As Megan helps him pick up the pieces, can he persuade her he isn’t the careless charmer she thinks he is? Isn’t a man innocent until proven guilty?" 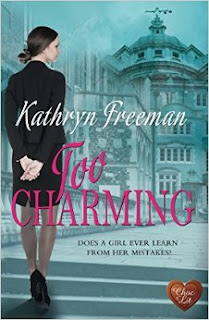 I am a bit behind the times, as this was released in 2013, but what an incredible debut from Kathryn Freeman!

The characters are likeable (and in Scott's case, absolutely to die for loveable) and the chemistry is the most explosive I've seen in a while. I loved that Scott wasn't a "what you see is what you get" man and I also loved discovering the other side to him, even if it was a frustrating journey that made me want to smack Megan several times over.

I adored his relationship with Megan's little girl and the moments with Megan's parents also brought a smile to my face. All in all, I adored it - it (well let's not kid ourselves, Scott) had my heart and soul hooked and I never wanted to put it down.

The only slight disappointment was the end - when it came, it was too quick and is the sort of ending that screams out for an epilogue and in the absence of that, I would love to revisit these characters in the future to see where they ended up.

The writing is outstanding; I feel like I lived every emotion with Megan and Scott and often found myself holding my breath as the chemistry and tension was so strong. I cannot wait to discover more of Kathryn Freeman.

I understand that Kathryn is just about to release her third book with Choc Lit (out August 13th) and it is bound to be another scorcher.

Thank you to NetGalley and ChocLit for the e-copy of Too Charming in exchange for my honest review.