"A woman murdered. A crime unsolved. A mystery that has lasted a century.

A hundred years ago, the true story of the brutal murder of Miss Jean Milne in a small seaside town captured the imagination of the whole country. A wealthy spinster who lived alone in a crumbling mansion, Miss Milne appeared to be the very model of respectability. But, behind the facade, Miss Milne was living a secret life.

For a century, her murder has gone unsolved. Why was this quiet spinster tied up in her own home, tortured and brutally murdered? Who could have committed such a heinous crime in this quiet little town?

Now, using newly-released evidence from police files, eye witness testimony hidden for a century and long forgotten newspaper reports from the scene, Andrew Nicoll has brought the case back from the dead to reveal the secrets of the little town where Jean Milne was murdered - the little town where he has spent his life. And the evidence has revealed that the quiet spinster found tied and tortured to death was not all that she seemed.

Set in the heart of one of the wealthiest communities in the world, at the very height of the British Empire, it's a shocking tale of class division, money, sex, lies, betrayal and murder.

And, at last, after a hundred years, the curious death of Miss Jean Milne may finally have found a solution." 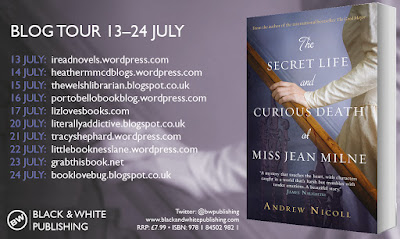 I loved the sound of this story and jumped at the chance to take part in the blog tour! When I first started reading, I was momentarily panicked into thinking I had made a big mistake and that I was going to hate it but I was wrong.  It took me a few pages to settle into the rhythm and the style of writing but once I was settled, I was hooked.

The Secret Life and Curious Death of Miss Jean Milne really is a mystery - the fact that this book is based on true events makes it all the more captivating.

Andrew Nicoll has done an exceptional job of turning facts into fiction; the style, pace, characters and narrative are all absolutely perfect and the book remains enthralling until the last.  Nicoll has created a sense of the time and place of Miss Jean Milne so well - he appears to have stayed true to the right facts at the same time as highlighting the gaps that really should have been filled and investigated at the time.

I did not guess the twists and turns that Nicoll was going to take us on during this journey but when it happens, it is so immersing, it certainly could be real.  I felt that this book was completely as it should be - there didn't feel like there were any gaps and everything felt like it was perfectly wrapped up for the reader.

If you google it, there is plenty of information available on the real life mysterious murder and even the case files are available following a Freedom of Information request.  It is a shame that we cannot categorically know the truth of what happened to Miss Jean Milne but Nicoll gives you a version of events that certainly could be true... 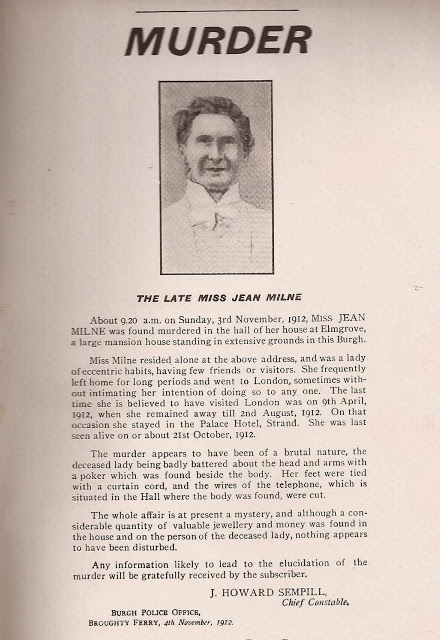 The Secret Life and Curious Death of Miss Jean Milne is out NOW.

Thank you to Black and White Publishing for the copy in exchange for an honest review.
Posted by Pukkapad at 10:00