Review of The Night Circus by Erin Morgenstern

** What is it about ** - Usually at this point I would quote the synopsis from the book BUT in this case, I don’t think that should be read in full before opening the book! Therefore all I’m going to say about this book is:
“The circus arrives without warning. No announcements precede it. It is simply there, when yesterday it was not. Within the black-and-white striped canvas tents is an utterly unique experience full of breathtaking amazements. It is called Le Cirque des Rêves, and it is only open at night.”


“But this is no conventional spectacle…Behind the scenes a dangerous game is being played by two young magicians, Celia and Marco, who, at the behest of their masters, are forced to test the very limits of the imagination – and of love…” 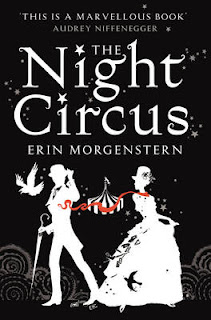 This book is set to be the publishing sensation of 2011 which usually means that a huge number of long-filled-with-anticipation-readers will be hugely disappointed. On one hand, I can see why this might be (I’ll come back to that in a moment), however I wasn’t disappointed.  This might be because I didn’t know enough about all the rave reviews or perhaps because I can appreciate certain things within the book where others focus on the things that are lacking.
The best way I can describe this book is that it is enchanting.  It’s intriguing from the start and is almost as though when you open the first page a spell is cast over you which isn’t released until you’ve turned the very last page.

I enjoyed the book thoroughly, however having read 387 pages of exceptionally detailed narrative, I felt there was something lacking.  It took me a while to work out what this was, and most of the thanks go to The Book Smugglers and their excellent review of this book for helping me work out what that thing is.  As I don’t want to go into any specific details of the plot, it’s a little hard to explain but Thea from The Book Smugglers explains it exceptionally well: “the game itself – i.e. the entire impetus for the plot – never really feels like a pressing, urgent thing. For the entire book, the “game” (often referred to but never truly understood or addressed) remains sort of undefined and dreamlike. That’s not a bad thing, but I can’t help but feel like there should have been something more to it. As it is, The Night Circus is less of a book with a clear storyline and more a series of vignettes and impressions – which is fantastic and masterfully created, but I can’t help but want just that little extra oomf.”  I have to agree – the plot did lack a certain element of oomf.  This could be because it was overshadowed by the gorgeously enchanting and vivid descriptions of the circus or it could be because of a theory Ana from The Book Smugglers has come up with! Her theory is this: “Every single character in this novel EXCEPT the main characters should matter MORE. To me, Celia and Marco are mysterious and depth-less on purpose. Because it is the other characters’ vibrancy and depth that tip the scales of the game and eventually determine its outcome! Never before in the history of this feud there were so many people being part of this game – it is their destiny and that of the Circus itself that are so important and therefore why they are better developed.”  I like to agree with Ana, and add a little of my own.  Yes, the challenge or game appears to be the central point to this book and it is vague throughout and I see many several reviewers state that it needed more detail as they couldn’t quite grasp the how’s and why’s of it.  Yet, to me that was the point.  The challenge wasn’t even clearly understood by the players themselves so why should the reader by privy to such information.  All is revealed eventually, and we find out as the characters do.  The book is set over a number of decades, beginning in 1873 and ending in 1903 which I think is why the game isn't pressing or urgent.  It becomes part of who Celia and Marco are, it's all-consuming which is why it is part of every page of the book without specifically being about it!

The narrative is third person omniscient and this works exceptionally well.  It allows Morgenstern to shift between people and time frames without losing any momentum at all.  There is a fair amount of jumping around within this book, yet it works.  The book has different threads running through it.  Firstly, there is the narrative that guides you through the circus itself.  It’s almost like being there but not quite; it’s like watching the circus through a snow globe with your hands gripped to the sides and your face pressed against the glass at the top!  Secondly, there are quotes (most likely clippings from the newspaper articles referred to within the book).  Finally, there is the story itself, yet even this isn’t told in a simple chronological order.  It skips about between dates and characters.  Once you’ve finished the book, you can truly appreciate the skill that has gone into this book in bringing it together in the way it has been.  The stories of many different characters are interwoven together exceptionally well without leaving the reader confused.  Yes, it isn’t particularly fast-paced, but it’s gripping in a different way.  The detail is beautiful and all-consuming.  The leisurely pace means it isn’t predictable on any level.  It’s like an exceptionally well-crafted clock; each piece slowly comes together until the cogs begin to turn and you can begin to comprehend each minute as it passes.
If you don’t like escapist magical fantasy, this book isn’t for you.  However, if you do, this is a must read! This book is unlike most books I’ve ever read in that it isn’t easily forgettable and it will stay with me for a very long time.  I think it would be even better on a second read.
The proof copy I received had black and white graphical pages inter-linking parts of the book.  I truly hope this made it to the final copy!  I love the final UK cover – it’s perfect for what is contained inside.
************************
Summit Entertainment have already bought the film rights for this.  The book, as I have said, is incredibly descriptive and visual so I hope they tread carefully with how they portray this book, and in particular, the circus; so many people will have clearly-defined images in their head making the transition from paper to screen a very fragile one!
************************
If you’re happy to read a bit more of the plot than I was willing to give you on this occasion, I highly recommend you head over to The Book Smugglers and read their review of The Night Circus here