Review of All That Mullarkey by Sue Moorcroft

Revenge and love: it's a thin line...
The writing's on the wall for Cleo and Gav. The bedroom wall, to be precise. And it says 'This marriage is over.' Wounded and furious, Cleo embarks on a night out with the girls, which turns into a glorious one night stand with...
Justin, centrefold material and irrepressibly irresponsible. He loves a little wildness in a woman and he's in the right place at the right time to enjoy Cleo's.
But it’s Cleo who has to pick up the pieces of a marriage based on a lie and the lasting repercussions of that night. Torn between laid-back Justin and control freak Gav, she’s a free spirit that life is trying to tie down. But the rewards are worth it! 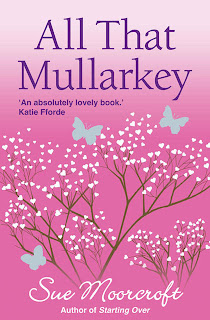 *******************************
** What I thought **
Another wonderful book from Sue Moorcroft.  I have to admit that I was so besotted with the loveable hero Ratty in her previous book ‘Starting Over’.  Even though it's been a few months since I read Starting Over, I'm still very much in love with him and so it feels a little unfaithful to love Justin, so I loved him slightly les!! But he is gorgeous, most certainly loveable and involved in some seriously steamy trips to the bedroom.  The kind of man every girl wants in her life, and not as just a friend! You can see why Cleo falls for him, and why he falls for her too – she’s feisty and a real heroine!

Sue Moorcroft once again has a wonderful style of writing that draws you in and leaves you desperate to know more, and ultimately longing for a happy ending.  You get to read from Gav and Justin’s point of view, as well as Cleo’s and this is done exceptionally well and really brings the whole thing to life.  It’s also lovely to read not just about romance, but about Cleo’s relationship with little Shona.
As with Starting Over, it’s fairly obvious who is going to end up with who but it’s the path that leads them there that makes or breaks a book.  And in this case, the path is full of twists and turns that make you wonder and keep you reading.
Can’t wait to read Dream a Little Dream, her next book which is also set in Middledip!
*******************************
Thanks to ChocLit for the copy of All That Mullarkey (and the chocolate!!!)
Posted by Pukkapad at 13:53