"It begins with a phone call. It ends with a missing child.

A few days later, Constance’s uncle, Karl Lawson, suddenly finds himself swept up in a media frenzy created by journalist Amanda Bowe implying that he is the prime suspect.

Karl’s life is in ruins. His marriage is over, his family destroyed. But the woman who took everything away from him is thriving. With a successful career, husband and a gorgeous baby boy, Amanda’s world is complete. Until the day she receives a phone call and in a heartbeat, she is plunged into every mother’s worst nightmare." 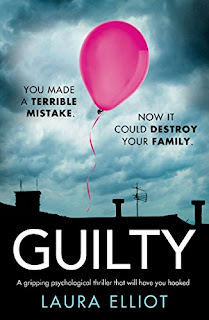 This book wasn't what I expected but it was delightfully good.

Guilty is split into four parts and set over a longer time period than usual.  Having only skimmed the synopsis, I was expecting the entire book to be about the missing school girl and so I was surprised when this element of the storyline came to a conclusion relatively early on in the book.  I don't want to give anything away by explaining the four different parts but it is like several strands, stretching over a number of years, focusing at different points on the different characters and different stages of their lives, which are then brought together by the end.

The story had so many twists and turns along the way and I never really knew what was coming until the author wanted me to know.

It is hard not give away and so I won't say much more.  But what I will say is Guilty has well-developed characters and a well-thought through plot.  I devoured it in two days; it was definitely difficult to put down.

I'd recommend reading this when you have the time to dedicate - I think it would be more enjoyable than reading in small chunks as it will allow you to immerse yourself in this gripping thriller.

I received a free copy of this e-book through Net Galley in return for an honest review.
Posted by Pukkapad at 13:00