The Ballroom Café by Ann O'Loughlin

Welcome to Book-Love-Bug and the next stop on
The Ballroom Café Blog Tour....

"Sisters Ella and Roberta O'Callaghan live in separate wings of their crumbling Irish mansion. They haven't spoken for decades, torn apart by a dark family secret from their past, and only communicate through the terse and bitter notes they leave for each other in the hallway.


Debbie, an American woman, is searching for her birth mother. She has little time left but as she sets out to discover who she really is and what happened to her mother, she is met by silence and lies at the local convent.


With the bank threatening, Ella tries to save the family home by opening a café in the ballroom – much to Roberta's disgust. And when Debbie offers to help out in the café, the war between the sisters intensifies. But as Debbie finally begins to unravel the truth, she uncovers an adoption scandal that will rock both the community and the warring sisters.


Powerful and poignant, The Ballroom Café is a moving story of love lost and found."

You can follow every stop of the blog tour by visiting each of the following blogs: 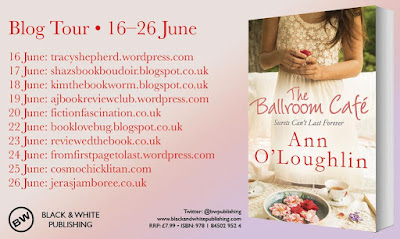 I adored The Ballroom Café which is a very touching story and will no doubt touch the hearts of many people across the world (and not just those with Irish connections) as it features the uncovering of an Irish adoption scandal.

It brings to mind Philomena and the scandal which has shocked people in recent years.  However, at the same time this book is not really comparable to to Philomena; The Ballroom Café is so much more than just a story about adoption; it is a thought-provoking story of community, of love and loss, of hope and of friendship.  I loved that the backdrop was based on true events, and you can read more about the Irish adoption scandal below.

I immediately felt like I belonged in this story which is set in County Wicklow, Ireland.  Whilst heavily tinged with tragedy, there is a really light and buoyancy  that radiates from this book.  The characters are fabulous, whether that be the main characters or the supporting cast.  I loved the relationship between the two sisters and the way they communicated only by short terse notes having not spoken for decades and I loved the way the various characters really touched each others lived.

The story is both intriguing and captivating.  I was totally hooked and when the ending came, it was satisfying but there were some loose ends that left me craving more.  My one and only complaint would be that the ending felt a little bit rushed, as though the editing sword had fallen a little to harshly in places.  I wanted to bask in the ending and I wanted to know more.

I loved Ann O'Loughlin's style of writing, the words and chapters flowed perfectly which keeps you turning the pages and the characters are all excellently drawn to create the perfect story.  I was shocked to discover that The Ballroom Café is Ann's debut book, as it feels like something from an extremely accomplished author; Ann's years of journalism and writing clearly shine through.

Thank you to Black & White Publishing for the copy in exchange for an honest review.

The Ballroom Café is out now in kindle format and paperback.  I cannot recommend highly enough that you get your copy NOW.  It is currently an absolute bargain on Kindle:

"About the Irish Adoption Scandal

A scandal that has been simmering under the surface for many years in Ireland, novel portrays the never-ending pain of those taken from the arms of their mothers and the unbearable heartbreak of the young unmarried mothers who never saw their children again.

Up to 2,000 children were secretly adopted and sent to America from Mother and Baby homes run by religious orders in Ireland.The mothers left behind were unmarried, rejected by their families and almost outcasts in Catholic Ireland.

The ‘mail-order adoptions’ to the US continued well into the 1960s and 1970.While it was illegal to pay for adoption, the adoptive parents gave donations towards expenses – several hundred pounds, which equates to thousands in today’s terms.

‘Many children were simply spirited away, with little thought for their birth mothers left behind or indeed the homes the children were sent to, which were often dysfunctional,’ Ann O’Loughlin said.

She added: ‘In my research for this book I have listened to so many stories of heartbreak. Only now in Ireland are women beginning to tell their stories and realise the shame is not theirs, but at the feet of the Catholic Church.’ "
Posted by Pukkapad at 11:55