"Sometimes, letting someone into your heart is the bravest risk to take.


Claire Nixon is a twenty-year-old college dropout with a secret she’ll never tell. Then she meets sexy Adam Parker. Claire knows the flirting is harmless, but guys like Adam mean trouble. Then a seemingly innocent comment spurs a bet between them: if Adam can get Claire to reveal the secret that made her leave her college and her life behind, she has to re-enroll.

Claire’s sure she can win. She's perfected the art of forgetting her past. But she isn't prepared for Adam's relentless pursuit, and she's definitely not prepared when her first love, rock-star Chris Knight – and her heartbreaking secret ­– comes banging down her door…" 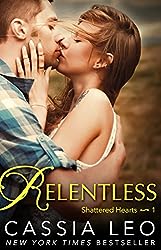 I had previously read one book by Cassia Leo, Black Box, which I had loved as a beautifully tender, soul-clenching story (review can be found here).  There are similarities to the first of this Shattered Hearts series (as published by Transworld in the UK and Australia), as although it is a love story, there are serious undercurrents and damaged souls as well as shattered hearts.

The Shattered Hearts Series is stated to be an adult contemporary romance series, and whilst it feels a little bit like a YA book, it is not intended for readers under the age of 18 due to strong language, drug reference and sexual content (of which there is quite a lot!).

Cassia Leo has a way of writing which draws you in and it is so easy to visualise the scene playing out on the page in front of you, almost as though you're sat watching a movie.  The characters are memorable and special and the storyline is strong (although there was one element that nagged at me, and I do not want to give anything away so I will just say that when Claire's secret does come out in a fairly public way, I could not believe that nothing was made of it in the media given that Chris, a rock-star, clearly had a huge fan base and no doubt, media, following.  It clearly was not the way the story was going to go, but it just bugged me given the world we live in now).

I loved the way the relationship was built between Adam and Claire as they together battle their demons and, at this stage, there was no doubt in my mind as to who I wanted Claire to end up with.

I was very glad to have the the second in the series, Pieces of You, on my kindle so that I could drive straight into that next instalment.

Thank you to NetGalley and Transworld for the free copy of Relentless which was provided in exchange for an honest review.
Posted by Pukkapad at 08:58